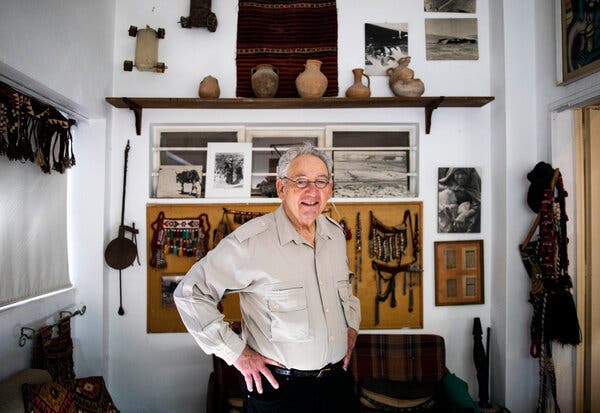 JERUSALEM — When Clinton Bailey first began documenting Bedouin life in the 1960s, the nomadic tribes lived pretty much as their ancestors, raising livestock, wandering in search of pastures and pitching tents under the stars.

Mr. Bailey would join their migrations in the southern Israeli Negev desert and the Sinai Peninsula for weeks on camel back. They would try their luck at planting grains in the winter, he said, then return months later for the harvest.

With a tape recorder, camera and jeep, he spent the next 50 years recording Bedouin oral poetry, tribal negotiations and trials, interviews with elders, weddings and rituals, proverbs and stories.

“I decided to try to capture that culture,” Mr. Bailey said. “I could already see it was beginning to disappear.”

Now an octogenarian, Mr. Bailey recently donated his archive of 350 hours of audio tape, photos and slides to the National Library of Israel.

Providing a broad portrait of the lives, art, law, economics, history and customs of what was a largely illiterate society, the archive is being fully digitized and cataloged online. Believed to be unique in depth and scope, the archive will be freely accessible to scholars and researchers everywhere and preserve the trove for posterity.

“It was a story of survival going back 4,500 years,” he said, describing his fascination with life adapted to the harsh conditions of the wilderness. “I lived among the Bedouin, traveled with them, listened to them and asked them questions.”

But with the imposition of modern borders, government restrictions on movement and the encroachment of economic and technological change in the region, traditional Bedouin society and culture, then on the cusp of an abrupt transition, has since all but vanished.

“As the National Library, our mandate is to document and preserve all the cultures in this land,” said Raquel Ukeles, head of collections at the library and the longtime curator of its Islam and Middle East collection. “We have a lot of holes. This is the first step to filling in Bedouin culture and hopefully not the last.”

It is a complex challenge. Transcription involves navigating between colloquial Bedouin dialect and standard literary Arabic. Besides identifying recordings by subject, date and location, the aim is to make them searchable according to tribal confederation, sub-confederation, and by the particular tribe and clan.

Aided by the recent normalization of diplomatic relations between Israel and the United Arab Emirates, another society that grew out of traditional Bedouin culture, Ms. Ukeles has been in contact with archivists in the Emirates about possible collaboration.

Mr. Bailey, a native of Buffalo, N.Y., who also advocated for Bedouin civil rights in Israel, practically stumbled into his lifelong pursuit. After having studied Islamic history and Arabic in Israel and earning a Ph.D. from Columbia University, he returned to Israel in 1967.

A chance encounter with the wife of David Ben-Gurion, the founder of the Israeli state, led to a job teaching English at an educational center in the Negev desert. Out jogging, he would encounter Bedouin shepherds and talk to them. They would invite him back to their tents. After the 1967 war, with Israel in control of the Egyptian Sinai, he could access even more remote tribes.

“I realized in visiting them that they really had a different culture that might have been as old as the Bible,” he said. “I have since discovered that their culture is about 2,000 years older than the Bible and made a very big contribution to Judaism and Islam.”

He was speaking in his classic apartment in an old neighborhood of Jerusalem. The bookshelves of his small office were crammed with dictionaries and the chronicles of early travelers to Arabia and the Holy Land. A laptop was perched on a cluttered desk. Drawers were filled with old cassette tapes, each one labeled.

Mr. Bailey has written books on Bedouin poetry, proverbs, law and, most recently, Bedouin culture in the Bible.

It all took patience. Describing some of his subjects as “great poets and smugglers,” he said, “I often had to hang around with them for a day or so before I’d maybe hear a poem.”

By about 2008, when he stopped working in the field, it had become harder to find such people since many of those who had grown up in the traditional way had died. Some of their children inherited the memory of the culture, he said, but that too gradually faded out as distance and communication changed with the advent of transistor radios, cars and mobile phones.

The archive is already proving of value to younger generations of Bedouins who live a more modern life, but for whom the traditional culture remains a source of pride.

Daham Al Atawneh, a retired publisher from the Bedouin town of Hura in the Negev, recently approached Mr. Bailey for help with researching a book he was writing about his late father, Musa, the sheikh of the small Atawneh tribe. Mr. Bailey would come to his father and play recordings of poems, Mr. Atawneh recalled, and the sheikh would interpret them. Many contained vocabulary and allusions that few outsiders could understand. Mr. Bailey annotated the works in his book on poetry.

Most of the Bedouins currently living in the Negev are thought to have migrated to the area centuries ago from Saudi Arabia, Egypt and the Syrian desert.

Mr. Atawneh was born in 1945, before the establishment of the state of Israel. For the Bedouins, it was not a happy experience. “We used to be a free people who roamed the Negev and had land,” he said, “but no documents, being an illiterate society.”

The Israelis exploited their lack of deeds, he said, and many lost their land overnight. First the Bedouin were forced to move east. Then Israeli military rule was imposed, requiring them to get permission to go anywhere. Once military rule was lifted in 1966, the changes came fast. Job opportunities opened. The government worked to urbanize the Bedouins, building them new towns that lacked infrastructure. They began to come into daily contact with Israeli society.

Two meals a day became three meals a day, then fridges were moved into homes. Instead of gathering at night to hear the elders talk, “everyone was sitting at home in front of the TV,” he added. The Bedouin also came to value education.

Mr. Atawneh said Mr. Bailey had done “very sacred work” in collecting the poetry. “This preserves it for eternity,” he said. “Maybe my children will want to go back to their history one day. There is a record now.”

Ibrahim Nsasra, 39, a business and social entrepreneur from the Bedouin town of Lakia and the chairman of Tamar Center Negev, a nonprofit organization that works in the southern region to help young Bedouins close educational gaps, said he missed aspects of the old culture, including the respect for, and the wisdom of, the elders.

The son of a Bedouin judge, he said he remembered listening to the trials as a child and used to feed the sheep before school and shepherd them at weekends. His own children, he said, were more attached to screens.

“What Clinton did is very worthy of appreciation, and not to be taken for granted.” Mr. Nsasra said. “Usually, the strong write history from their point of view. He is writing from the field and providing a mirror of what was, and how things were, for us and for the children yet to be born.”

Providing a broad portrait of the lives, art, law, economics, history and customs of what was a largely illiterate society, the archive is being fully digitized and cataloged online. Believed to be unique in depth and scope, the archive will be freely accessible to scholars and researchers everywhere and preserve the trove for posterity.

“It was a story of survival going back 4,500 years,” he said, describing his fascination with life adapted to the harsh conditions of the wilderness. “I lived among the Bedouin, traveled with them, listened to them and asked them questions.”

But with the imposition of modern borders, government restrictions on movement and the encroachment of economic and technological change in the region, traditional Bedouin society and culture, then on the cusp of an abrupt transition, has since all but vanished.