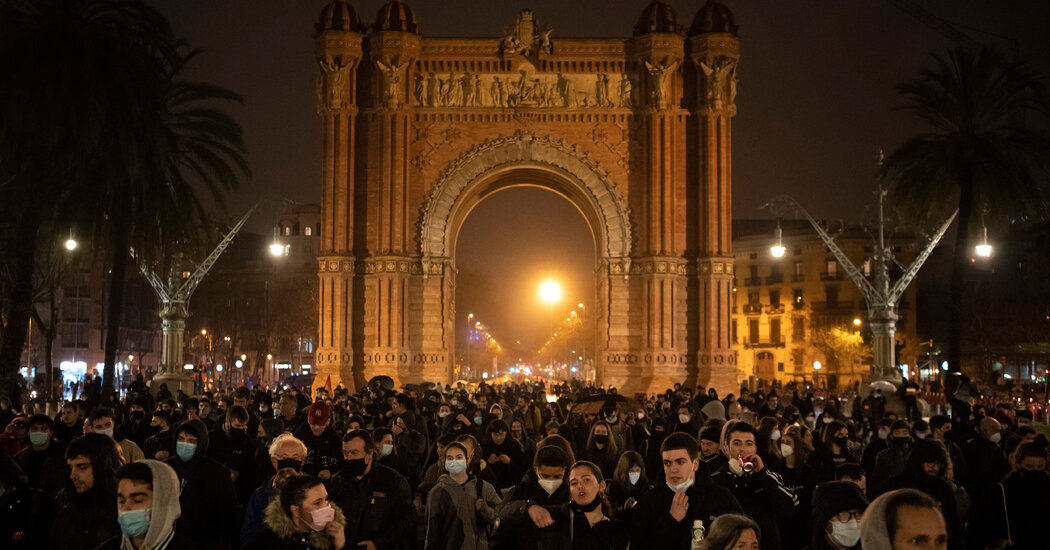 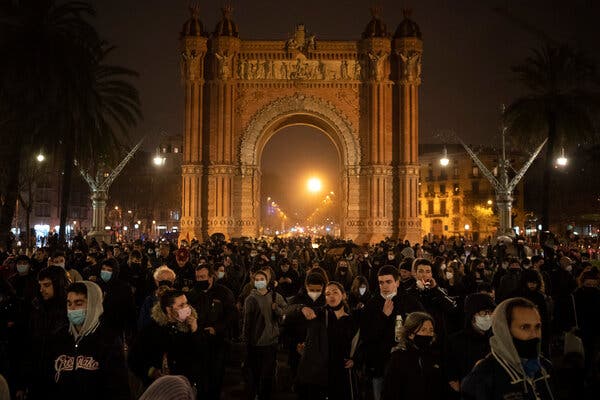 BARCELONA — It had all the markings of a free speech showdown: Pablo Hasél, a controversial Spanish rapper, had barricaded himself on a university campus to avoid a nine-month jail sentence on charges that he had glorified terrorism and denigrated the monarchy. While students surrounded him, police in riot gear moved in; Mr. Hasél raised his fist in defiance as he was taken away.

But Oriol Pi, a 21-year-old in Barcelona, saw something more as he watched the events unfold last week on Twitter. He thought of the job he had as an events manager before the pandemic, and how he was laid off after the lockdowns. He thought of the curfew and the mask mandates that he felt were unnecessary for young people. He thought of how his parents’ generation had faced nothing like it.

And he thought it was time for Spain’s youth to take to the streets.

“My mother thinks this is about Pablo Hasél, but it’s not just that,” said Mr. Pi, who joined the protests that broke out in Barcelona last week. “Everything just exploded. It’s a whole collection of so many things which you have to understand.”

For nine nights, this seaside city’s streets, long quiet from pandemic curfews, have erupted in sometimes violent demonstrations that have spread to Madrid and other Spanish hubs. What began as a protest over Mr. Hasél’s prosecution has become a collective outcry by a generation that sees not just a lost future for itself, but also a present that has been robbed, years and experiences it will never get back, even when the pandemic is gone.

The frustration of young people stemming from the pandemic is not limited to Spain alone. Across Europe, university life has been deeply curtailed or turned on its head by the limitations of virtual classes.

Social isolation is as endemic as the contagion itself. Anxiety and depression have reached alarming rates among young people nearly everywhere, mental health experts and studies have found. The police and mostly young protesters have also clashed in other parts of Europe, including last month in Amsterdam.

“It’s not the same now for a person who is 60 — or a 50-year-old with life experience and everything completely organized — as it is for a person who is 18 now and has the feeling that every hour they lose to this pandemic, it’s like losing their entire life,” said Enric Juliana, an opinion columnist with La Vanguardia, Barcelona’s leading newspaper.

Barcelona was once a city of music festivals on the beach and all-night bars, leaving few better places in Europe to be young. But the crisis, which devastated tourism and shrank the national economy by 11 percent last year, was a catastrophe for Spain’s young adults.

It is an instance of déjà vu for those who also lived through the financial crisis of 2008, which took one of its heaviest tolls in Spain. Like then, young people have had to move back into the homes of their parents, with entry-level jobs being among the first to vanish.

But unlike past economic downturns, the pandemic cut much deeper. It hit at a time when unemployment for people under age 25 was already high in Spain at 30 percent. Now 40 percent of Spain’s youth are unemployed, the highest rate in Europe, according to European Union statistics.

For someone like Mr. Pi, the arrest of the rapper Mr. Hasél, and his rage-against-the-machine defiance, has become a symbol of the frustration of Spain’s young people.

“I loved that the man left with his fist in the air,” said Mr. Pi, who said he hadn’t heard of the rapper before Spain brought charges against him. “It’s about fighting for your freedom, and he did it to the very last minute.”

The case of Mr. Hasél, whose real name is Pablo Rivadulla Duró, is also igniting a debate about free speech and Spain’s efforts to limit it.

The authorities charged Mr. Hasél under a law that allows for prison sentences for certain kinds of incendiary statements. Mr. Hasél, known as a provocateur as much as a rapper, had accused the Spanish police of brutality, compared judges to Nazis and even celebrated ETA, a Basque separatist group that folded two years ago after decades of bloody terrorist campaigns that left around 850 people dead.

In 2018, a Spanish court sentenced him to two years in prison, though that was later reduced to nine months. The prosecution focused on his Twitter posts and a song he had written about former King Juan Carlos, whom Mr. Hasél had called a “Mafioso,” among other insults. (The former king abdicated in 2014, and decamped Spain entirely last summer for the United Arab Emirates amid a corruption scandal.)

“What he’s said at trial is that they put him in prison for saying the truth, because what he says about the king, aside from all the insults, is exactly what happened,” said Fèlix Colomer, a 27-year-old documentary filmmaker who got to know Mr. Hasél while exploring a project about his trial.

Mr. Colomer, who on certain nights has led the Barcelona protesters, noted that others have been prosecuted in Spain for social media comments, a troubling sign for Spain’s democracy, in his view. A Spanish rapper known as Valtònyc fled to Belgium in 2018 after getting a prison sentence for his lyrics that a court found glorified terrorism and insulted the monarchy — charges similar to those Mr. Hasél faces.

Yet some feel Mr. Hasél crossed a line in his lyrics. José Ignacio Torreblanca, a political science professor at the National Distance Education University in Madrid, said while the law’s use troubled him, Mr. Hasél was not the right figure to build a youth movement around.

“He’s no Joan Baez, he’s actively justifying and promoting violence. This is clear in his songs. He says things like, ‘I wish a bomb explodes under your car,’” said Mr. Torreblanca, referring to a song by Mr. Hasél that called for the assassination of a Basque government official and another that said a mayor in Catalonia “deserved a bullet.”

Amid public pressure that was growing even before the protests, the Justice Ministry said on Monday that it planned to change the country’s criminal code to reduce sentences related to the kinds of speech violations for which Mr. Hasél was sentenced.

But for Nahuel Pérez, a 23-year-old who works in Barcelona taking care of the mentally disabled, freedom for Mr. Hasél is only the start of his concerns.

Since arriving in Barcelona five years ago from his hometown on the resort island of Ibiza, Mr. Pérez said, he hasn’t found a job with a salary high enough to cover the cost of living. To save money on rent, he recently moved into an apartment with four other roommates. The close quarters meant social distancing was impossible.

“The youth of this country are in a pretty deplorable state,” he said.

After Mr. Hasél was arrested at the university, Mr. Pi, who had seen the news on Twitter, began to see people announcing protests on the messaging app Telegram. He told his mother he wanted to go to the demonstrations, but she didn’t seem to quite understand why.

“I’m not going to go look for you at the police station,” is what she told him, Mr. Pi said.

He thought about what it must have been like for his mother at his age.

There was no pandemic. Spain was booming. She was a teacher and married in her 20s to another professional, Mr. Pi’s father. The two found a house and raised a family.

Mr. Pi, by contrast, is an adult still living with his mother.

“Our parents got all the good fruit and here’s what we’re facing: There’s no fruit in the tree anymore, because they took the best of it,” said Mr. Pi. “Everything that was the good life, the best of Spain — there’s none of that left for us.”

When he’s not at the protests, Mr. Pi spends his days working as a hall monitor in a nearby school that operates a mix of online and socially distanced in-person classes.

It’s not the career he wanted — not a career at all, he says — but it pays the bills, and lets him talk to high school students to get their outlook on the situation in Spain.

He doesn’t mince words about what lies ahead for them.

“These are the people who will be me in ten years,” he said. “I think they’re hearing something that no one has ever told them. I would have listened if someone had come to me when I was 12 and said: ‘Listen, you’re going to have to struggle for your future.’”