Honoring One Life Among 500,000In North Philadelphia, a family gathered for a last day with “The Best Mom Ever.”By Rachel Wisniewski and Shelby Knowles 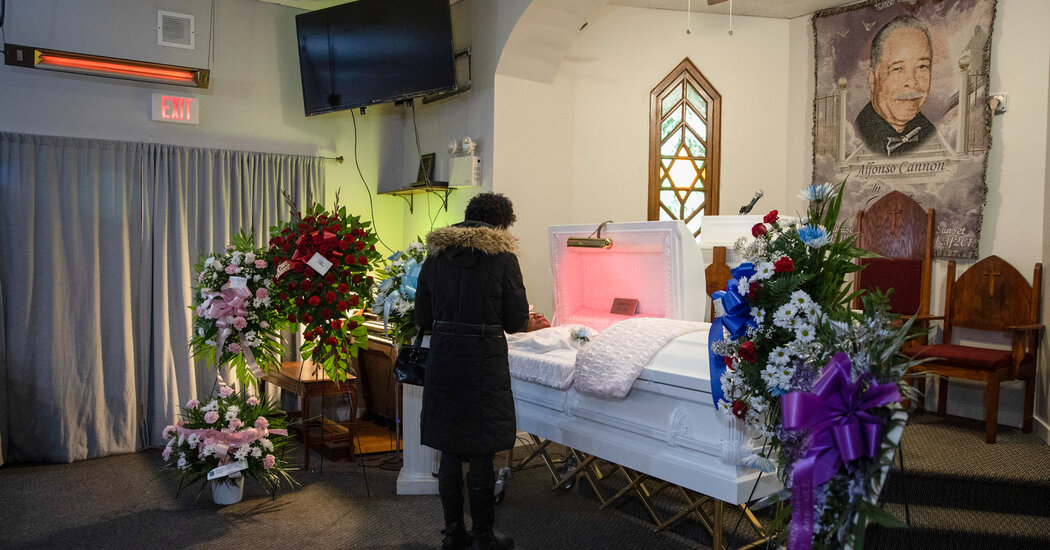 PHILADELPHIA — As Mildred Perry’s coffin was lowered into the snow-covered ground at Greenmount Cemetery on Tuesday, her family sang “I’ll Fly Away,” a traditional selection to close a funeral service.

Ms. Perry, 94, thought she had beaten the coronavirus after she contracted it last spring. But eight months later, her lungs had not recovered. She died on Feb. 15 at Temple University Hospital in Philadelphia, of prolonged medical complications from Covid-19, as the country was nearing another painful milestone in the pandemic.

Ms. Perry grew up in Emanuel County in Georgia, then moved to Philadelphia shortly after her first marriage. She worked in a factory that made slipcovers for seven years before leaving to raise her family. She loved Gospel music, Sam Cooke, and hosting family visiting from out of town.

“Our couch was always open,” said Sam Perry-Cross, 61, her youngest son, who described her as the “ultimate provider.”

“She was just there for everybody.”

Ms. Perry had nine children and 16 grandchildren, as well as many great- and great-great-grandchildren.

About 25 family members were in attendance at the viewing at Alfonso Cannon Funeral Chapels in North Philadelphia on Tuesday. More family and friends wanted to pay their respects, but the chapel had to limit the size of the gathering because of pandemic restrictions.

Family members had to preregister on a guest list with the chapel. All visitors were greeted with a pump of hand sanitizer as they entered the chapel for the viewing.

“If Covid wasn’t here, we would’ve had it in a big church with a couple hundred people,” said Mr. Perry-Cross. “So, today was very mild and reduced compared to what we’re used to.”

The event was broadcast on a livestream for loved ones who could not attend in person. Ms. Perry’s granddaughter Aisha Jones connected with family over FaceTime and Facebook Live. Family members tuned in from Delaware, Georgia, Washington, D.C., and other parts of Philadelphia.

According to the Philadelphia Department of Public Health, as of Feb. 23, there were 117,022 cases of the coronavirus and 3,085 deaths in the city. Data released by the city showed that Black Philadelphians comprised the largest group of coronavirus cases in the city, at 32 percent; the second largest cohort were categorized as “unknown.” White Philadelphians made up 22 percent. Black residents also had the highest overall cases when broken down by age group.

Ms. Perry died a week before the United States death toll from the coronavirus topped 500,000 cases.

Nationwide, Covid-19 has had a disproportionate impact on communities of color. Black people have died at 1.9 times the rate of white people, according to the Centers for Disease Control and Prevention.

Larry Perry, another of Ms. Perry’s sons, had shirts and cloth masks made that proclaimed, in bold script, “The Best Mom Ever.”

The pandemic has greatly reduced in-person interactions with family and friends. Ms. Perry’s home-going services were a time for the family to come together — some members meeting for the first time, according to Mr. Perry-Cross.

“It’s a shame that it’s only for one day,” Mr. Perry-Cross said. “But it’s great to come back home.”