Texas Farmers Tally Up the Damage From a Winter Storm ‘Massacre’ 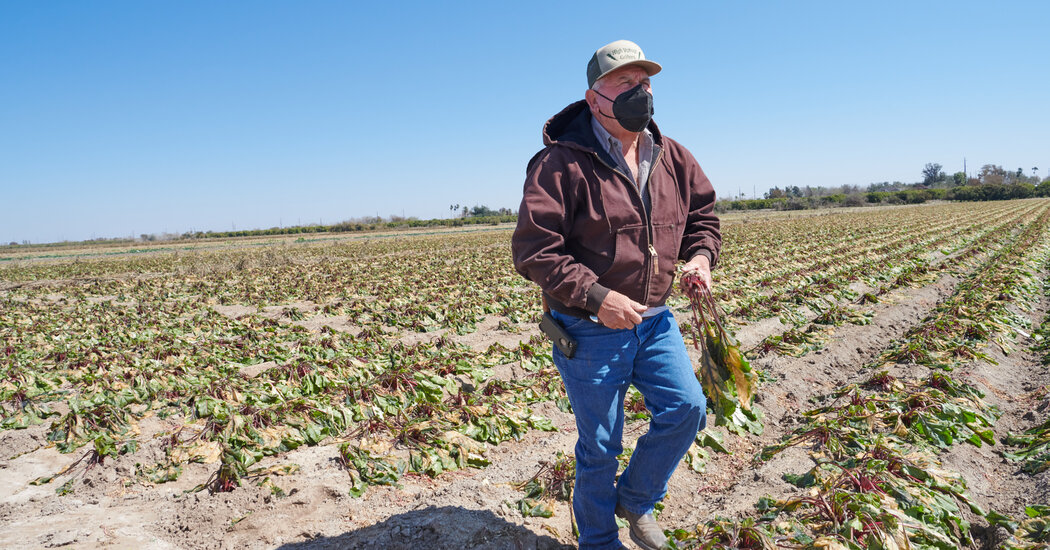 Texas farmers and ranchers have lost at least $600 million to the winter storm that struck the state last month, according to an assessment issued this week by economists at the Texas A&M AgriLife Extension Service.

Damage and disruption from the bitter blast of cold and snow, which farmers are calling “the St. Valentine’s Day massacre,” is likely to cause some gaps on grocery shelves in the eastern part of the country and push prices higher, especially on crops like sweet Texas onions that were just about to be harvested, leafy greens that would have headed for the East Coast and even cabbage, which this year might not be the St. Patrick’s Day sale item it often is.

The storm also caused a severe shipping and processing bottleneck that continues to challenge the food-supply chain. Truck drivers were stuck for days waiting to load or unload produce. Processing plants had no power. Dairies were forced to dump 14 million gallons of milk, said Sid Miller, the Texas commissioner of agriculture.

In a state that sells $25 billion worth of agricultural products each year and has more farms and ranches than any other, the damage is spread far and wide. The storm killed newborn calves, acres of newly planted watermelons and nearly the entire crop of Valencia oranges.

“We all know it’s possible. This is what we sign up for,” said April Flowers, who watched grapefruit freeze solid on the trees her family grows on 6,500 acres in the Rio Grande Valley. “It still doesn’t prepare you for when it does happen. It’s gut-wrenching.”

Citrus took the biggest blow. This year’s lemon and lime crops are gone. The grapefruit harvest in the Rio Grande Valley was about halfway finished when the cold came, said Dale Murden, a citrus grower and president of Texas Citrus Mutual, a trade group. The freeze rendered the fruit that remained on the trees useless for anything but juicing, but many of the juice-processing plants were shut down because they had no power.

The loss is at least $230 million, but that doesn’t include the financial hits growers will feel over the next few years. The ice killed many trees that were just a year or two old, and damaged older ones that were beginning to bud. That means replanting, and less fruit during future harvests.

The livestock industry was the second-hardest hit by the storm, suffering $228 million in losses, according to the Texas A&M report, which was released on Tuesday. Water tanks froze, feedlots and dairies ran out of feed, and some grain-rich grazing fields were damaged.

Poultry operations lost heat, which led to the death of chicks and left hatcheries with eggs that won’t hatch. Many calves, lambs and kids had just been born. The number that froze to death has yet to be counted.

“It was around the clock, all hands on deck, trying to keep the animals alive,” Mr. Miller said.

He pointed to other animal deaths in the state’s $1.3 billion exotic species business. More than 125 species of what are commonly called “Texotics” — including wildebeests and blackbuck antelopes — live on thousands of ranches in the Hill Country and across South Texas, where they are bred, displayed for sightseers and hunted for sport.

“We have a lot exotic game from India and Africa that don’t tolerate the cold,” Mr. Miller said. “Thousands and thousands are dead.”

Vegetable growers are still trying to assess which crops will need to be completely replanted and which can be saved. The Texas A&M report estimated the loss to those farmers at $150 million.

The fight against the deep freeze, which hurt both large growers and those with smaller urban farms, was waged differently from place to place, depending on the amount of cold and snow a region received, the duration of the cold and how well people who knew the freeze was coming could prepare.

The state’s two worst-hit growing regions — the Rio Grande Valley, at the southernmost point of Texas, and an area north of Laredo known as the winter garden region — were preparing to harvest winter crops like onions, cabbage and spinach, and were starting to plant spring crops like watermelon.

The state’s 1,500 acres of chipping potatoes in the Rio Grande Valley are gone. Bok choy and other green crops were destroyed or severely damaged, along with peaches, strawberries, wine grapes and berries.

Jody Wiggins, whose company in southern Texas grows several million watermelons a year, said that at least two thousand acres of plants were lost and that planting was delayed on several thousand more, which will push back the harvest. Other crops will face similar delays.

“There are going to be days when people go the grocery store and don’t see things on the shelf between now and the end of May,” Mr. Wiggins said.

The onion crop is of particular concern. The first sweet spring onions that are harvested beginning in March are intended to supply cooks who have been relying on storage onions all winter.

The freeze hurt mature onions whose bulbs were partly above ground and stressed others, forcing some onions to grow what is called a seeder at the center. The seeders hollow out the onions and reduce yields.

As much as half of the first fresh crop of spring onions may be gone, said Juan Anciso, a professor and extension service vegetable specialist with Texas A&M University. The loss could be about $42 million.

Cabbage from Texas makes up about 30 percent of the total U.S. supply. The crop wasn’t wiped out, but it was damaged enough to reduce supplies, which could lead to higher prices in March.

“A lot of stuff took it on the chin for sure,” said Larry Stein, a professor and extension horticulturist at Texas A&M.

Bret Erikson is a vice president of J&D Produce, in Edinburg, one of the largest vegetable growers in the state. Its produce, sold under the Little Bear brand, is shipped throughout Texas and to stores along the Eastern Seaboard.

About 2,000 acres were planted when temperatures dropped to 21 degrees on Feb. 15 and ice covered the fields. When things warmed up, the company found that some plants, like beets and herbs, could be salvaged, or cut back and regrown. Others are gone.

“The Swiss chard got creamed,” Mr. Erikson said. “It totally melted after the sun came out. The field looked like a kid’s finger painting. It’s hard to see that as a grower. These are kind of like your children.”

Like other growers and packers, the company’s owners have been trying to help workers who lost wages because vegetables couldn’t be harvested and the packing sheds were shut down. The company had about 800 people in those jobs, he said, and have been trying to keep them working.

Citrus took the biggest blow. This year’s lemon and lime crops are gone. The grapefruit harvest in the Rio Grande Valley was about halfway finished when the cold came, said Dale Murden, a citrus grower and president of Texas Citrus Mutual, a trade group. The freeze rendered the fruit that remained on the trees useless for anything but juicing, but many of the juice-processing plants were shut down because they had no power.

The loss is at least $230 million, but that doesn’t include the financial hits growers will feel over the next few years. The ice killed many trees that were just a year or two old, and damaged older ones that were beginning to bud. That means replanting, and less fruit during future harvests.