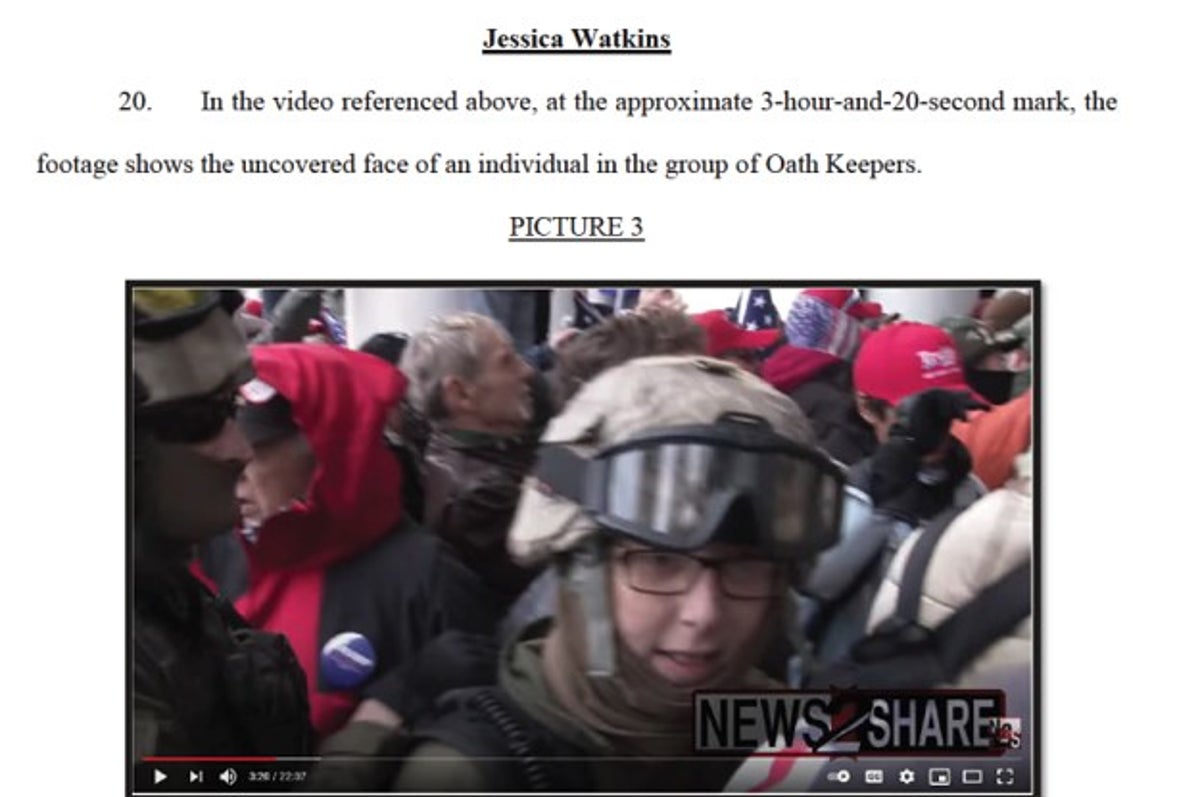 “If Trump asks me to come, I will,” alleged Capitol insurrectionist Jessica Watkins wrote in a November text message, according to a new court filing.

WASHINGTON — Hours before day three of former president Donald Trump’s impeachment trial was set to begin on Thursday, federal prosecutors offered new evidence that a member of the alleged Oath Keepers conspiracy charged with planning an assault on the US Capitol on Jan. 6 was “awaiting direction” from Trump.

Jessica Watkins, an Army veteran and, according to court papers, a member of the Oath Keepers militia group, is accused of participating in a conspiracy to assault the Capitol in “an organized and practiced fashion” to stop Congress from certifying the results of the election. Watkins has been behind bars since her arrest on Jan. 17, and prosecutors filed papers on Thursday asking a judge to keep her in jail while her case moves forward.

“Watkins exhibited a single-minded devotion to obstruct through violence
an official proceeding that, on January 6, was designed to confirm the next President of the United States,” prosecutors wrote. “Crimes of this magnitude, committed with such zeal, belie any conditions of release that would reasonably assure the safety of the community or by which Watkins could be trusted to abide.”

Trump has denied that he incited the riot, but Thursday’s filing marked the latest instance of court papers highlighting how people charged with violently descending on the Capitol last month believed they had Trump’s approval and were taking direction from him. Some defendants charged with participating in the insurrection have begun to craft defense strategies around the argument that they understood the president and commander in chief to be instructing them to go to the Capitol.

Prosecutors had previously released excerpts of messages that Watkins allegedly sent in the weeks before Jan. 6 as evidence of her role in organizing a violent assault on the Capitol, but Thursday’s memo included new details. According to the government, on Nov. 9, less than a week after Election Day, Watkins sent a text message to an unidentified person that showed she was concerned about taking action without explicit approval from Trump — “Watkins indicated that she was awaiting direction from President Trump,” prosecutors wrote.

“I am concerned this is an elaborate trap. Unless the POTUS himself activates us, it’s not legit. The POTUS has the right to activate units too. If Trump asks me to come, I will. Otherwise, I can’t trust it,” Watkins allegedly messaged at the time.

In a Dec. 29 text exchange that was cited in earlier charging papers, Watkins wrote to Donovan Crowl, a codefendant charged in the Oath Keepers conspiracy, that a group was going to Washington on Jan. 6 because “Trump wants all able bodied Patriots to come,” and that “If Trump activates the Insurrection Act, I’d hate to miss it.” Prosecutors wrote in Thursday’s memo that these texts showed that Watkins had “perceived her desired signal” from Trump.

Watkins isn’t facing weapons charges, but prosecutors say she was involved in efforts to plan for a “quick reaction force,” or “QFR,” to have weapons readily accessible. A few days before Jan. 6, prosecutors said Watkins told two people she was coordinating with to travel from Ohio to Washington that, “We are not bringing firearms. QRF will be our Law Enforcement members of Oathkeepers.” But then prosecutors say the instructions changed, and Watkins messaged: “Weapons are ok now as well. Sorry for the confusion.”

Prosecutors quoted recordings from a walkie talkie app that Watkins allegedly used on Jan. 6, writing that as she pushed into the Capitol she “gleefully exclaimed over the channel, ‘We are in the mezzanine. We are in themain dome right now. We are rocking it. They are throwing grenades, they are fricking shootingpeople with paint balls. But we are in here.'”

“For Watkins, this was a moment to relish in the swirling violence in the air,” prosecutors wrote in Thursday’s memo.

Most of the more than 200 people charged with participating in the insurrection have been allowed to go home as their criminal cases proceed in court. Prosecutors have argued to keep a small number of them behind bars, focusing those efforts on people charged with assaulting law enforcement officers, bringing or using weapons, or taking any sort of leadership role in orchestrating the violence.

Watkins is charged with conspiracy along with two other alleged Oath Keepers members, Crowl and Thomas Caldwell, who have also remained in jail since their arrests. Caldwell’s lawyer filed papers earlier this week arguing for pretrial release, denying the conspiracy allegation and other charges in the indictment, contending that there was no evidence Caldwell actually went inside the Capitol on Jan. 6, and disputing that he was a member of the Oath Keepers, let alone a leader in the organization.

Caldwell’s lawyer argued that even if Caldwell did communicate with Watkins and Crowl about going to Washington, the indictment didn’t “negate” the possibility that those discussions “involved non-criminal coordination or planning to attend a legal rally protected under the First Amendment.”

Later in the day on Thursday, prosecutors also filed their response to Caldwell, arguing that he should remain in jail because the “detailed and organized nature of Caldwell’s planning for the January 6 operation and Capitol assault was uniquely dangerous and continues to impact security in the District and beyond.” They argued that it didn’t matter that Caldwell wasn’t part of a group that went inside the Capitol — they did note evidence that he breached the security perimeter outside and was on the grounds — because he was “like any coach on the sideline,” and that after Jan. 6 he’d tried to conceal his involvement by deleting messages he’d sent via Facebook.

“Far from an ancillary player who became swept up in the moment, Caldwell was a key figure who put into motion the violence that overwhelmed the Capitol. And, had all of Caldwell’s plans come to life, he appeared ready and willing to wreak even more havoc,” prosecutors wrote.

Prosecutors quoted messages that they say Caldwell exchanged with Watkins, Crowl, and other unidentified individuals that referenced earlier demonstrations that involved the Oath Keepers and other extremist groups such as the Proud Boys and Three Percenters, as well as extensive planning efforts leading up to Jan. 6. On Dec. 23, prosecutors say Caldwell texted another person that he was “expecting
a big turn out of the Proud Boys” and explained that he was using the messaging app Signal to “do some secure comms with the Oathkeepers.” A week later, he allegedly messaged that same person about joining meetings with the Three Percenters, which the government described as a “far-right anti-government” group, saying that he “would like to meet some of the guys if you think I ‘m [sic] cool enough.”

On Jan. 3, prosecutors said that Caldwell sent another message to that same person about arranging for a boat that could bring “heavy weapons” across the Potomac River to Washington.

“If we had someone standing by at a dock
ramp (one near the Pentagon for sure) we could have our Quick Response Team
with the heavy weapons standing by, quickly load them and ferry them across the
river to our waiting arms,” Caldwell allegedly wrote. “Dude! If we had 2 boats, we could ferry across and
never drive into D.C. at all!!!! Then get picked up. Is there a way to PLEASE pass
the word among folks you know and see if someone would jump in the middle of
this to help. I am spreading the word, too. Genius if someone is willing and hasn’t
put their boat away for the winter.”

After Caldwell was arrested, prosecutors said that a search of his home revealed a document called “Death List” that had the name of an election official; the government didn’t identify that person. Prosecutors also said that law enforcement officers who searched Caldwell’s home found invoices for “various types of live ammunition and what appears to be a concealed firearm intentionally built to look like a cell phone, sold by ‘Ideal Conceal Cellphone Pistol.'”

According to the indictment returned by a grand jury on Jan. 27, Caldwell messaged with Watkins in late December about efforts to organize buses to Washington on Jan. 6, and told her about another unidentified person who was “committed to being the quick reaction force anf [sic] bringing the tools if something goes to hell.” A few days later, Caldwell allegedly messaged Crowl about hotel arrangements, saying that “Oathkeeper friends” were coming from North Carolina and that an unidentified person was bringing “the goodies in case things go bad and we need to get heavy.”

Court records don’t identify a lawyer for Watkins. The judge hasn’t set hearing dates yet to consider the government’s detention requests for Watkins and Caldwell. Prosecutors haven’t notified the court about their position on pretrial detention for Crowl, and Crowl hadn’t asked for release as of Thursday morning.

It’s Time To Talk About “Prank” Culture On YouTube