Out ThereSeven Hundred Leagues Beneath Titan’s Methane SeasMars, Shmars; this voyager is looking forward to a submarine ride under the icebergs on Saturn’s strange moon.By Dennis Overbye 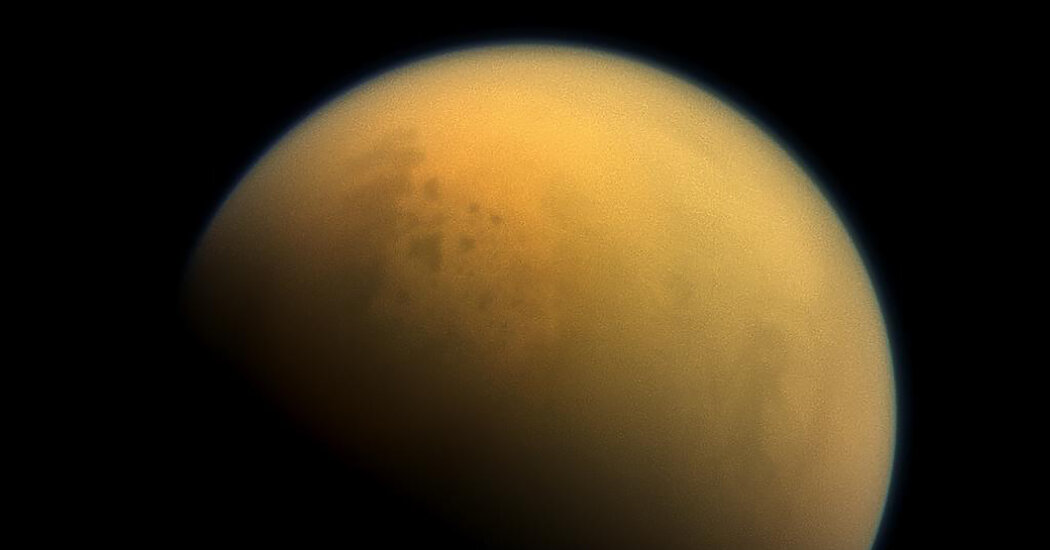 What could be more exciting than flying a helicopter over the deserts of Mars? How about playing Captain Nemo on Saturn’s large, foggy moon Titan — plumbing the depths of a methane ocean, dodging hydrocarbon icebergs and exploring an ancient, frigid shoreline of organic goo a billion miles from the sun?

Those are the visions that danced through my head recently. The eyes of humanity are on Mars these days. A convoy of robots, after a half-year in space, has been dropping, one after another, into orbit or straight to the ground on the Red Planet, like incoming jets at J.F.K. Among the cargo is a helicopter that armchair astronauts look forward to flying over the Martian sands.

But my own attention was diverted to the farther reaches of the solar system by the news that Kraken Mare, an ocean of methane on Titan, had recently been gauged for depth and probably went at least 1,000 feet down. That as deep as nuclear submarines will admit to going. The news rekindled my dreams of what I think would be the most romantic of space missions: a voyage on, and ultimately even under, the oceans of Titan.

“The depth and composition of each of Titan’s seas had already been measured, except for Titan’s largest sea, Kraken Mare — which not only has a great name but also contains about 80 percent of the moon’s surface liquids,” said Valerio Poggiali, research associate at the Cornell Center for Astrophysics and Planetary Science. Dr. Poggiali is the lead author of a paper describing the new depth measurements in The Journal of the American Geophysical Union.

NASA recently announced that it would launch a drone called Dragonfly to the Saturnian moon in 2026. Proposals have also circulated for an orbiter, a floating probe that could splash down in a lake, even a robotic submarine.

“The Titan submarine is still going,” Dr. Poggiali said in an email, although it is unlikely to happen before Titan’s next summer, around 2047. By then, he said, there will be more ambient light and the submarine conceivably could communicate on a direct line to Earth with no need of an orbiting radio relay.

Titan is the weirdest place in the solar system, in some regards, and also the world most like our own. Like Earth, it has a thick atmosphere of mostly nitrogen (the only moon that has much of an atmosphere at all), and like Earth, it has weather, rain, rivers and seas.

But on this world, when it rains, it rains gasoline. Hydrocarbon material drifts down like snow and is shaped into dunes by nitrogen winds. Rivers have carved canyons through mountains of frozen soot, and layers of ice float on subsurface oceans of ammonia. The prevailing surface temperature is minus 290 degrees Fahrenheit. A chemical sludge that optimistic astronomers call “prebiotic” creeps along under an oppressive brown sky. Besides Earth, Titan is the only world in the universe that is known to harbor liquid on its surface — with everything that could imply.

Astrobiologists have been eager to get a closer look at this world ever since Voyager I swooped past it in 1980 and radioed back evidence that its smoggy atmosphere was four times as dense as our own. Time, technology and human ingenuity have since revealed that cloudy world to be a natural wonderland.

The northern regions of Titan are laced with a network of lakes and rivers. The largest of them, called Kraken Mare, after a Norse monster, is bigger than all of North America’s Great Lakes combined.

The Cassini orbiter spent 13 years buzzing around in the Saturnian system, mapping these features in detail.

On Aug. 21, 2014, when Cassini passed about 600 miles above the northern realms of Titan, it used its radar altimeter to measure the depths in Kraken Mare and Moray Sinus, an estuary at the sea’s northern coastline. Engineers could measure the depths of the seas by noting the delay between when the radar bounced back from the surface and when it bounced off the seabeds.

It turned out that Moray Sinus was about 280 feet deep, but there was no return echo from the Kraken bottom; either the lake was very, very deep, or it absorbed the radar signals so completely that they never escaped.

“Thus, the central part of Kraken Mare must be deeper than 330 feet and likely more than 1,000 feet,” Dr. Poggiali concluded.

Another major surprise, he said, was the composition of Kraken Mare. Scientists had expected it to contain relatively more ethane, which is denser than methane, than the northernmost sea on Titan, Ligeia Mare.

In prevailing models of Titan hydrology, Dr. Poggiali said, the presence of methane-nitrogen rain increases with increasing latitude. That would cause the composition of the more “poleward seas” to be more methane rich. “In simple words, ethane behaves a little like salt in marine water on Earth,” he said.

He added: “For sure, the composition we derived for the liquid filling the Moray Sinus, this large bay in the northern part of Kraken Mare, is quite surprising. We expected it to be definitely more ethane-rich. What we found out, instead, is that the Kraken is much more similar to the Ligeia Mare, the second largest sea on Titan. This has significant implications for how the hydrologic cycle works.” There could still be more ethane in the southern parts of the Kraken Mare, he added, but the existing data does not extend that far.

This is of more than abstract planetary science. In the imagination of scientists like Dr. Poggiali Titan is a laboratory where, over millions of years, chemistry could have learned how to generate energy and store information. “These are processes that have happened on our planet too, but they left no traces! As you probably see, we need to get back to Titan to better understand the mystery of life.” he said.

Like an old captain sitting on the dock, Dr. Poggiali rattled off the possible voyages of a proposed 20-foot-long NASA submarine. The trip would begin in the center of Kraken Mare and go up to Moray Sinus, where the submarine would spend three weeks measuring tides and compositions before cruising coastlines, crossing the strait of Bayta Fretum and heading south through a throatlike passage called Seldon Fretum.

During these explorations, the vessel would map and periodically sample the sea bottom and gather detailed images of the shoreline where possible. Titan’s surface gravity is lower than Earth’s, so a small submarine could venture deeper without being crushed by pressure as it would be in a terrestrial ocean of salt water.

Moreover, Dr. Poggiali said, because methane is transparent to radio waves, the submarine could perhaps transmit data directly to Earth while still submerged. In all, over the course of 90 days, the little submarine could travel 2,000 miles under the sea, at a speed of a foot per second, according to a NASA website describing the proposed submarine.

Meanwhile, I can hardly be blamed for still dreaming of giant Titanic squid cavorting in that freezer-full cosmic fish tank of natural gas.

Since the early days of the space program, cosmic visionaries have described space as a “new sea,” as President John F. Kennedy put it in a speech at Rice University in 1962. He never dreamed that we might actually sail under it.

Sync your calendar with the solar system

Never miss an eclipse, a meteor shower, a rocket launch or any other astronomical and space event that’s out of this world.

A guide to the spacecraft beyond Earth’s orbit.

“The Titan submarine is still going,” Dr. Poggiali said in an email, although it is unlikely to happen before Titan’s next summer, around 2047. By then, he said, there will be more ambient light and the submarine conceivably could communicate on a direct line to Earth with no need of an orbiting radio relay.

Titan is the weirdest place in the solar system, in some regards, and also the world most like our own. Like Earth, it has a thick atmosphere of mostly nitrogen (the only moon that has much of an atmosphere at all), and like Earth, it has weather, rain, rivers and seas. 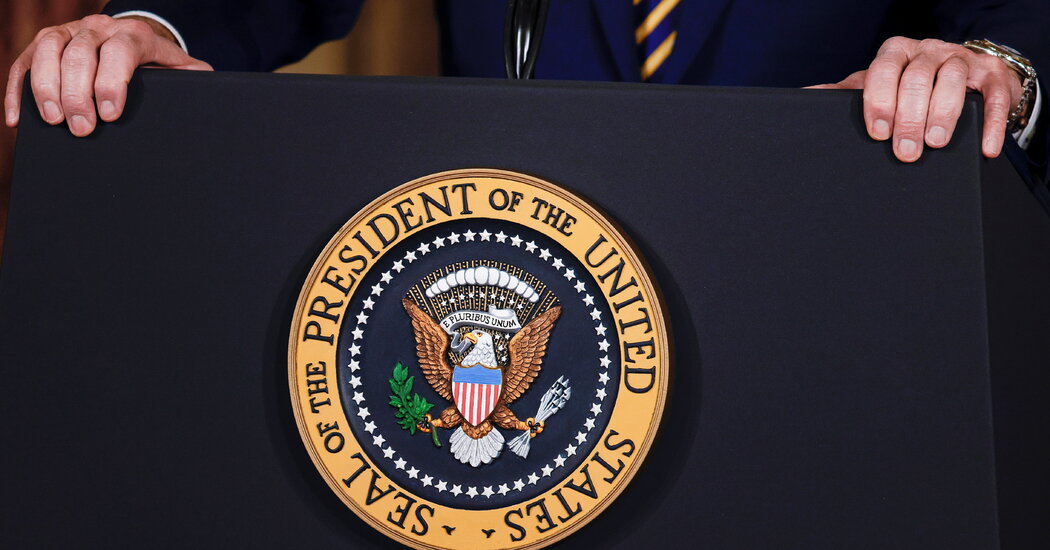 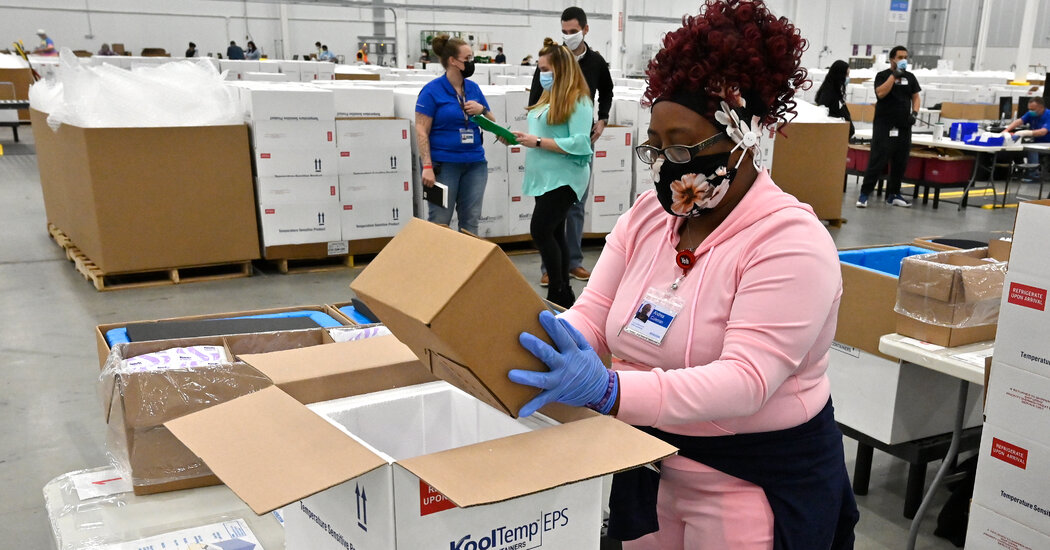 Here is what we know about the rollout of the Johnson & Johnson vaccine.Much is still to be determined about how this new tool will be used, but some things are already clear.By Patrick J. Lyons

After El Salvador Election, Bukele Is on Verge of Near-Total Control 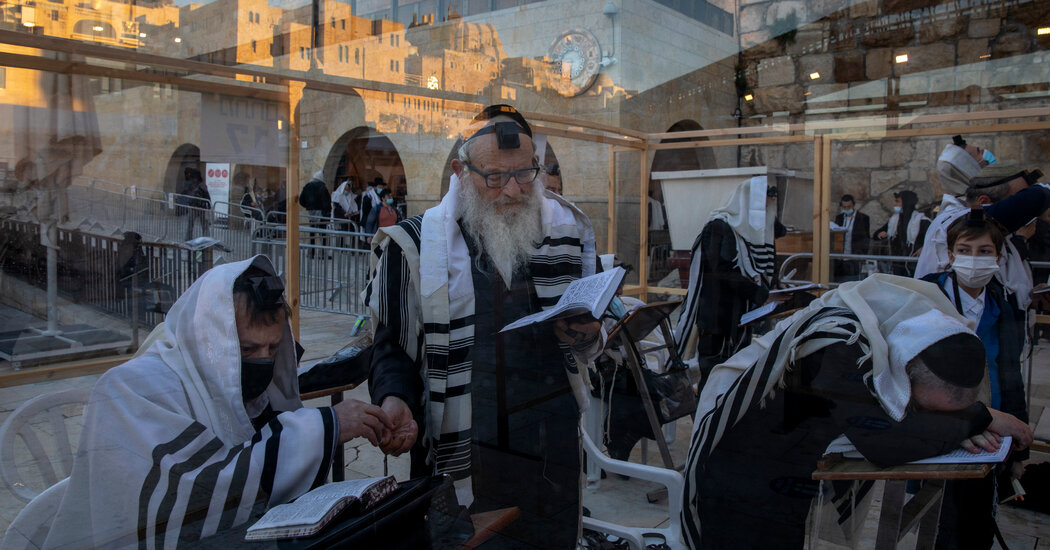