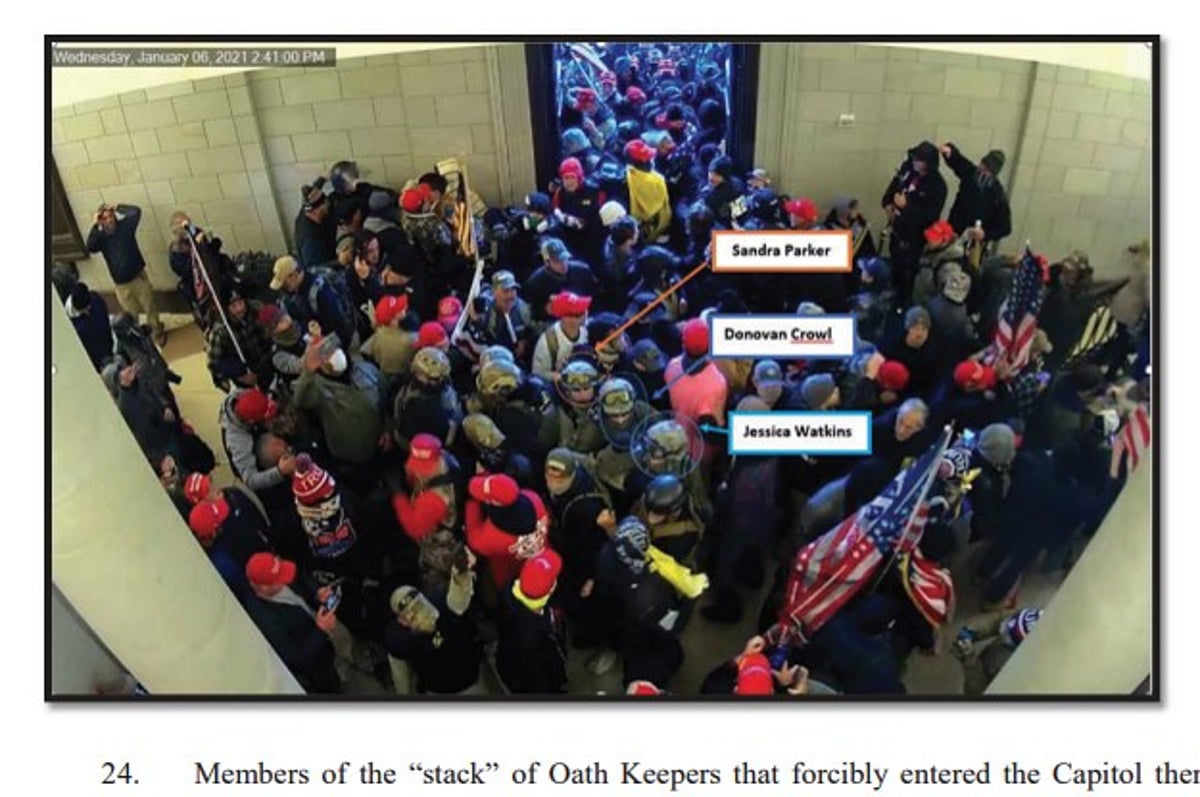 A federal grand jury has added six new people to its indictment of the Oath Keepers in one of the Capitol insurrection cases.

WASHINGTON — Three days after allegedly joining a mob that descended on the US Capitol on Jan. 6, Jessica Watkins wrote in a text that she’d been following the FBI’s investigation as it unfolded and wasn’t concerned about being arrested.

“[S]eems they’re only interested in people who destroyed things,” Watkins texted fellow Ohio resident Bennie Parker, 70, on Jan. 9, according to messages quoted by prosecutors in recently unsealed court documents. According to prosecutors, Parker and his wife, Sandra Parker, 60, accompanied Watkins to Washington D.C. and into the Capitol on Jan. 6. “I wouldn’t worry about them coming after us,” Watkins allegedly added.

Just over a week later, Watkins was arrested in Ohio. An Army veteran and member of the Oath Keepers, a right-wing militia organization that focuses recruitment on the military and law enforcement, Watkins was accused of joining a conspiracy of Oath Keepers members who planned in advance for violence on Jan. 6 and descended on the Capitol in an “organized and practiced fashion.” She and two others were indicted on Jan. 27.

On Friday, a grand jury in Washington, DC, handed down a new indictment that added six more people from around the country to the case, including the Parkers. Others included a Florida couple, Kelly Meggs, the “self-described leader” of the Oath Keepers’ chapter in Florida and his wife, Connie, as well as Graydon Young, 54, of Englewood, Florida, and his sister, Laura Steele, 52, from Thomasville, North Carolina. All six are charged with conspiring with Watkins and her original co-defendants, Thomas Caldwell and Donovan Crowl, to attack the Capitol to stop Congress from certifying the results of the presidential election

Prosecutors wrote that Parker, 70, texted at length with Watkins leading up to Jan. 6 and was listed in Watkins’ phone as “Recruit Ben – OSRM,” an acronym that the government says stood for Ohio State Regular Militia.

In the indictment, prosecutors describe the Oath Keepers as a “large but loosely organized collection of individuals, some of whom are associated with militias,” and note that some Oath Keepers members “believe that the federal government has been coopted by a cabal of elites actively trying to strip American citizens of their rights.” The document lays out a small but energetic effort to recruit and organize people willing to travel to Washington in tactical gear and body armor to protest what they felt was a stolen election.

As early as Nov. 9 — less than a week after the election — Watkins was sending text messages inviting people to her group’s basic training in Ohio, telling one person, “l need you fighting fit by innaugeration.”

On Dec. 27, according to the indictment, Parker, who lives about 75 miles from Watkins in Ohio, texted her, “I may have to see what it takes to join your militia, our is about gone.” He added that he and his wife, Sandra Parker, 60, were “like minded.”