After Stimulus Victory in Senate, Reality Sinks in: Bipartisanship Is Dead 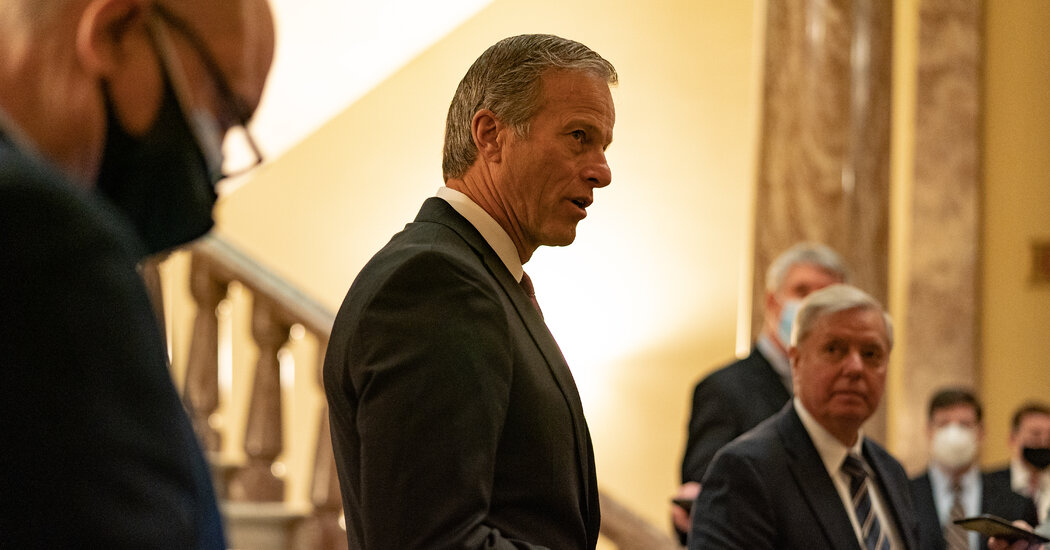 WASHINGTON — President Biden ran for the White House as an apostle of bipartisanship, but the bitter fight over the $1.9 trillion pandemic measure that squeaked through the Senate on Saturday made clear that the differences between the two warring parties were too wide to be bridged by Mr. Biden’s good intentions.

Not a single Republican in Congress voted for the rescue package now headed for final approval in the House and a signature from Mr. Biden, as they angrily denounced the legislation and the way in which it was assembled. Other marquee Democratic measures to protect and expand voting rights, tackle police bias and misconduct and more are also drawing scant to zero Republican backing.

The supposed honeymoon period of a new president would typically provide a moment for lawmakers to come together, particularly as the nation enters its second year of a crushing health and economic crisis. Instead, the tense showdown over the stimulus legislation showed that lawmakers were pulling apart, and poised for more ugly clashes ahead.

Mr. Biden, a six-term veteran of the Senate, had trumpeted his deep Capitol Hill experience as one of his top selling points, telling voters that he was the singular man able to unite the fractious Congress and even come to terms with his old bargaining partner, Mitch McConnell, Republican of Kentucky and the minority leader.

But congressional Democrats, highly familiar with Mr. McConnell’s tactics, held no such illusions. Now, they worry that voters will be punishing them more harshly in the 2022 midterm elections for failing to take advantage of their power to enact sweeping policy changes than they will for failing to work with Republicans and strike bipartisan deals.

Congressional Democrats want far more than Republicans are willing to accept. Anticipating the Republican recalcitrance to come, Democrats are increasingly coalescing around the idea of weakening or destroying the filibuster to deny Republicans their best weapon for thwarting the Democratic agenda. Democrats believe their control of the House, Senate and White House entitles them to push for all they can get, not settle for less out of a sense of obligation to an outdated concept of bipartisanship that does not reflect the reality of today’s polarized politics.

“Looking at the behavior of the Republican Party here in Washington, it’s fair to conclude that it is going to very difficult, particularly the way leadership has positioned itself, to get meaningful cooperation from that side of the aisle on things that matter,” said Representative John Sarbanes, Democrat of Maryland.

But the internal Democratic disagreement that stalled passage of the stimulus bill for hours late into Friday night illustrated both the precariousness of the thinnest possible Democratic majority and the hurdles to eliminating the filibuster, a step that can happen only if moderates now deeply opposed agree to do so.

It also showed that, even if the 60-vote threshold were wiped away, there would be no guarantee that Democrats could push their priorities through the 50-50 Senate, since one breakaway member can bring down an entire bill.

Republicans accused Democrats of abandoning any pretext of bipartisanship to advance a far-left agenda and jam through a liberal wish list disguised as a coronavirus rescue bill, stuffed with hundreds of billions of extraneous dollars as the pandemic is beginning to ebb. They noted that when they were in charge of the Senate and President Donald J. Trump was in office, they were able to deliver a series of costly coronavirus relief bills negotiated between the two parties.

“It is really unfortunate that at a time when a president who came into office suggesting that he wanted to work with Republicans and create solutions in a bipartisan way and try to bring the country together and unify, the first the thing out of the gate is a piece of legislation that simply is done with one-party rule,” said Senator John Thune of South Dakota, the No. 2 Senate Republican.

At their private lunch recently, Republican senators were handed a card emblazoned with a quotation from Ron Klain, the White House chief of staff, calling the coronavirus bill the “most progressive domestic legislation in a generation,” a phrase that party strategists quickly began featuring in a video taking aim at the stimulus measure.

The comment was a point of pride for liberal Democrats, but probably not the best argument to win over Republicans.

“I don’t understand the approach the White House has taken. I really don’t,” said Senator Susan Collins of Maine, a leader of a group of 10 Republicans who had initially tried to strike a deal with the White House but offered about one-third of what Mr. Biden proposed. “There is a compromise to be had here.”

Yet even as Mr. Biden hosted Republicans at the White House and engaged them in a series of discussions that were much more amiable than any during the Trump era, neither he nor Democratic congressional leaders made a real effort to find a middle ground, having concluded early on that Republicans were far too reluctant to spend what was needed to tackle the crisis.

Democrats worried that if they did not move quickly, negotiations would drag on only to collapse and leave them with nothing to show for their efforts to get control over the pandemic and bolster the economic recovery. They wanted to go big and not wait.

“We are not — we are not — going to be timid in the face of big challenges,” said Senator Chuck Schumer, Democrat of New York and the majority leader. “We are not going to delay when urgent action is called for.”

While Mr. McConnell lost legislatively, he did manage to hold Republicans together when there was an appetite among some to cut a deal. He learned in 2009, when President Barack Obama took office at the start of the Great Recession, that by keeping his Republican forces united against Democrats, he could undermine a popular new Democratic president and paint any legislative victories as tainted by partisanship, scoring political points before the next election. The same playbook seems to be open for 2021.

As they maneuvered the relief measure through Congress using special budget procedures that protected it from a filibuster, Democrats were also resurrecting several major policy proposals from the last session that went nowhere in the Republican-controlled Senate.

Foremost among them was a sweeping voting rights measure intended to offset efforts by Republicans in states across the country to impose new voting requirements and a policing bill that seeks to ban tactics blamed in unnecessary deaths. House Republicans opposed both en masse and the outlook for winning the minimum 10 required Republican votes in the Senate is bleak.

In the coming weeks, House Democrats plan to pass more uncompromising bills, including measures to strengthen gun safety and protect union rights — two pursuits abhorred by Republicans. Democrats fully recognize the measures will run into a Republican stone wall, but that is the point.

In getting Republicans on the record against what Democrats see as broadly popular measures, they are hoping to drive home the idea that, despite their party’s control of Washington and the White House, they cannot move forward on the major issues of the moment with the filibuster in place. They want voters to respond.

Frustrated at their inability to halt the pandemic measure, Republicans lashed out at Democrats and the president.

“They are doing it because they can,” said Senator Lindsey Graham of South Carolina, the top Republican on the Budget Committee, who said Mr. Biden’s pledges on fostering unity now rang hollow. “This is an opportunity to spend money on things not related to Covid because they have the power do so.”

Democrats would agree — they are using their substantial leverage to reach far beyond what Republicans can support, and say they are justified in doing so.

“Let’s face it,” Mr. Schumer said on the Senate floor. “We need to get this done. It would be so much better if we could in a bipartisan way, but we need to get it done.”

Congressional Democrats want far more than Republicans are willing to accept. Anticipating the Republican recalcitrance to come, Democrats are increasingly coalescing around the idea of weakening or destroying the filibuster to deny Republicans their best weapon for thwarting the Democratic agenda. Democrats believe their control of the House, Senate and White House entitles them to push for all they can get, not settle for less out of a sense of obligation to an outdated concept of bipartisanship that does not reflect the reality of today’s polarized politics.